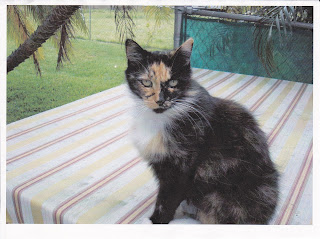 This is Puddy, a domestic long-hair calico cat.  We first met her in 1999 as she crossed our yard on her way to somewhere.  She was thin but her coat was shiny and there were no signs of disease or infection.   Her bearing was regal.  Unlike most cats she disapproved of being picked up or even petted.  She had a way of communicating her rules of engagement when approached.  If you were too dense to observe them, a bloody scratch was your reward.
Our first thought was that she was an abandoned cat, or lost.  On occasion she would lie on our patio, stretched out on her side.  I remarked to Patti that the poor thing looked like roadkill in that position.  She was that thin.  I started calling her Splat the Cat.
Shortly thereafter we learned Splat belonged to a home on our street.  The new couple who lived there were childless and both were away all day working.   They had four other cats and one cocker spaniel.   We decided Splat was very unhappy in that setting,  being much too regal to fight for food.  Royalty doesn't eat at boarding house tables.
We resisted the temptation to feed her.  She was not our cat and we felt sure her owners would soon see  she was thin and needed  more food than she was getting.
As time passed, Splat spent more time sitting or sleeping on our patio.  She developed a habit of climbing the fishtail palm that grows close to the front of our house.  From there she would leap to the roof, cross the roof and drop down onto the table in the rear patio.  Nothing prevented her from walking around the house except her deep need to let the world know that she did things her way.
One day she came to our house with a small wound on her neck.  She found an open closet door and settled in to clean herself, and sleep.  The next morning I came from our bedroom to find this lovely cat sitting by the sliding glass patio door, looking outside.  I opened the door and she left.
That evening I was on the couch, reading.   The patio door was open to enjoy the air and Splat came in with a field mouse dangling from her mouth.   She put two front paws on the coffee table in front of me and dropped the mouse there.   She drew back and sat on the floor, waiting to see if I understood the meaning of this gift.  I did, and I expressed it to her with words and touch.
This was a life changing moment for Splat and us. We began to feed her occasional meals, and we began to call her Puddy.
A few weeks later Puddy's owners left for a nine day vacation.  The husband came to our house to collect his cat.  He said he wanted to be sure she was safe and cared for while they were away.  Someone had been hired to visit the house daily and tend to the animals.  We had to let her go with him.
Nine days later, just before noon, Patti said to me:  "What's that noise?"  I stepped out front  and saw Puddy, two houses away, walking toward me, meowing continuously, an angry complaint of sound.  Obviously it had been no vacation for Puddy.  She had been let out and her first stop was our house and a hearty meal.
The former owners were knowledgable enough to know that cats, like souls, select their own society and they made no further effort to convince  the cat they called Fluffy to stay with them.  She was Puddy now.

Posted by Lincoln Hunter at 12:33 PM No comments: