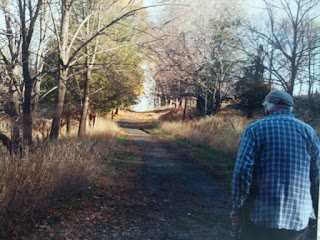 This photograph of my brother Alan was taken two or three years ago.  He is beginning one of his favorite hikes: a walk through Goose Pond State Park between Chester and Monroe, New York.
Once upon a time this road was called Lazy Hill Road.  It ran a few miles from Route 17 (now 17M) to Laroe Road.  It was populated only by dairy farms.   I have forgotten some of the names now but all the farms were located on the right side of the road with their backs to Goose Pond mountian and the creek that ran through the fields along the mountain's base.
At the top of the rise shown in the photo was the Tom Roe farm.  A mile farther was the Joe Piekara farm and then a farm called Sunnyvale which was the home of our maternal grandmother and step-grandfather, Maude and Thaddeus Mapes.  Alan and I spent a lot of our boyhood there.
Alan died last June so this is the first of his birthdays that I will observe without him.  I wrote about his death here last year.
Posted by Lincoln Hunter at 12:50 PM No comments:

Email ThisBlogThis!Share to TwitterShare to FacebookShare to Pinterest
Labels: memoir

-A report has surfaced that Katie Couric is leaving the post of anchor of the CBS Evening News.    An item included in that news report states that her salary is fifteen million dollars per year ($15,000,000 each year).
That's the equivalent of $300,000 a year for 50 years.  She has a five year contract so her 5 year gross earnings have been $75,000,000.  That's $1,500,000 per year for 50 years.
Ms Couric's job is not worth that size salary.  Her talents and background and education do not support payment of that size salary.  So what was CBS paying for?  If one asks, one will hear words like 'household name', 'celebrity', 'large fan base', 'cachet', 'star', etc.
Who someone is can be important but it should not be more important than what they can do.
I cite Ms Couric only as an example of a trend that has been evident for years,  especially in sports  and entertainment.  Less well-known but equally offensive are the inflated salaries and benefits for top corporate officers.
This is a serious symptom.  The wheels and gears and chains that move and drive the American capitalistic engine are badly out of balance or sync.  There is a disproportinate relationship between product and value.  This is an infection that  weakens and devalues the structure of our economic system.
The American ecologist Eugene Odum put it very well when he wrote "Growth beyond the optimum becomes cancer."
___________________________________________________________________________________________
Posted by Lincoln Hunter at 10:10 AM No comments:

Email ThisBlogThis!Share to TwitterShare to FacebookShare to Pinterest
Labels: kakistocracy

A FALLING OUT -- a short story

The online firm Scottrade polled 226 registered investment advisors for their opinion on the amount of retirement money people will need to live at the level of comfort they are used to enjoying.
71% of them stated that one million dollars will not be enough.  People between the ages of 25 to 42 will require 2 to 3 million dollars for a comfortable retirement.  You young'uns better get hoppin'.


Shortly after Katrina destroyed much of the Gulf Coast economy, the Governor of Mississippi was quoted as saying the first thing to do was get the casinos in Biloxi operating because "Casinos are the life blood of the state of Mississippi".  Wow, I wonder what Adam Smith would say about that!


Writing about a particular firm in the New York Times on April21, 2007, Brad Stone stated "revenues will inevitably flatten as the company matures.  If it wants to keep treating investors to torrid growth, the company needs to develop other ways to make money."  Again, what would Adam Smith say about that?

The way my time passes

Each day I ride a great white stallion through the streets of my town but no one sees it happen.
I stalk the halls of government, leaving instructions,  notes on policy,  economic proposals.   No one reads them.
I court the most beautiful shopgirls in town but they remain unaware.

One of my standard night dreams is a failure to please someone.  My actions, or the way I live, are an affront to another person who lives (or hovers?) nearby.  I am troubled by this but take no action to remedy it.
The person whom I fail to please is always a stranger, someone I have never seen or met before.

Whoever I am to myself, I am a different person to someone else.
I am a different person to myself now than I was when I was twenty.
How many of me have there been?
Consider how people change as they mature.  The physical aspect becomes so different with age as to make one unrecognizable to acquaintances of 50 years ago.  Are there not interior changes, cognitive and emotional, that are as drastic as the exterior changes to the physical self?   Aren't there unseen scars, old healed-over wounds.  Isn't there  a graying of the soul?

Email ThisBlogThis!Share to TwitterShare to FacebookShare to Pinterest
Labels: Jason

The house is so quiet now
The vacuum cleaner sulks in the corner closet
Its bag limp as a stopped lung, its mouth
Grinning into the floor, maybe at my
Slovenly life, my dog-dead youth.

I've lived this way long enough,
But when my old woman died her soul
Went into that vacuum cleaner, and I can't bear
To see the bag swell like a belly, eating the dust
And the woolen mice, and begin to howl

Because there is old filth everywhere
She used to crawl, in the corner and under the stair.
I know now how life is cheap as dirt,
And still the hungry, angry heart
Hangs on and howls, biting at air.

A favorite trick is the reduction of size in a product while the price remains the same or, in some cases, even rises.  For example, a half gallon (64 ounces) carton of orange is now 59 ounces.  They don't hide the number.  The change is overt but deceitful.
A half gallon of milk (8 cups) no longer says 64 ounces.  Instead, the label reads:
Serving Size: one cup.
Servings per container: about 8  (emphasis mine)
Covert and deceitful.
I wonder.  Have they thought this through?  How much lower can they take the size before it becomes an embarrassment?
Posted by Lincoln Hunter at 7:21 AM No comments:

About three years ago I discovered Joe Bageant on the internet.  I don't remember the circumstances but I am grateful for the chance to have read his work.
Joe Bageant's writing was a joy to read.  He was  funny.  His friend, Fred Reed, tells of Joe describing a girl with pierced nose, lips, eyelids, and more, looking like she had fallen face-first into an open tackle box.
Joe could  put together a critical appraisal of rural America that  swept the stage of most other players
But I was most impressed by his fight for the underclass of America.  What underclass?  Why, all of it, but especially the poor whites of Scots-Irish descent who live in rural Appalachia.  Joe did not romanticize them.  He acknowledged their racism, their parochialism, their culture which was so much less stellar than that found in Boston, LA, or New York City.  But he recognized their pride, and their worth as humans.  And he railed against the system that ignored them, pretending they weren't there.
But let him say it: